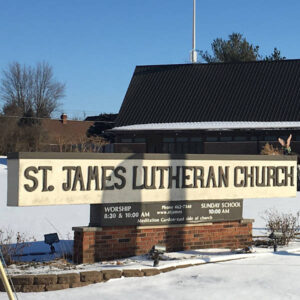 Three families met in August 1966 to discuss the possibility of forming an LCA congregation in Greenfield. After several meetings a worship service led by Pastor George Hoog, Assistant to the Synod President, was held October 2nd at the Junior High School. The name of St James Lutheran Church was chosen by this Association of families. A church school program began January 8, 1967. The land at the corner of Steel Ford Road and State Road 9 was purchased at the site for the church and parsonage.

Pastor J. Luther Seng was appointed Mission Developer January 22, 1967 and was called as the first pastor on May 18, 1967, serving until his retirement in June 1972. On May 14, 1967, St. James was formally organized in the Lutheran Church of America with 89 adults and 55 child members and was officially received into the Indiana-Kentucky Synod on May 22, 1967. Currently, St. James is a member of the Heartland Mission District of the North American Lutheran Church (NALC).

The congregation was active in a regional ministry in Knightstown 1969-1972 and sponsored two Laotian families in 1976, providing housing, food, medical and dental work, language study, jobs and guidance. Other Laotians were sponsored in 1978 and 1980. Pastor Terry Hudson served the congregation from August 1972 to December 1973.

Pastor Leslie C. Yeager was called and began his ministry in Greenfield on June 15, 1974, serving the congregation through the work of the church, including an extensive remodeling and building program in 1984-85. Pastor Yeager served the congregation until his retirement June 30, 1992.

Pastor Jerald M. Mielke served from July 19, 1993 through December 31, 2005. He led the congregation in a building and remodeling project during 1995. A Christian Education wing and a large Narthex were added as well as extensive renovations to the Sanctuary, office area and kitchen. The dedication service was held in November 1995.

Pastor Larry Gember started serving in 2008 until his retirement in 2020.

To bring people to Christ, encouraging relationships with Him and others.